Here I am, sitting at Cairns airport waiting for our flight back to Melbourne and contemplating our two weeks up here in FNQ.

It was a last minute decision to come up here, a combination of getting things sorted out around home and coordinating the frequent flyer points. Luckily all fell into place and we were able to pull it off. So after a rushed booking of flights, airport parking, accommodation and car hire, we found ourselves on a direct flight to Cairns at 6 am on Tuesday the 25th of November.

The reason for this trip was, of course birds! We have never been 'up north' at this time of year before and were keen to add a few of the https://cdn.zenfolio.com/zf/img/null.gif migrants to our Australia list. The main target, the stunning Buff-breasted Paradise Kingfisher had arrived a week or so prior, so we were confident on that one. Another target, the Spotted Whistling-duck had also been reported, so possibly another (although we had chased up on leads regarding this bird before, never having any luck). The Black-winged Monarch was almost a given at the McIver River crossing north of Cooktown, so maybe three? Number four possibility, the Pale-vented Bush-hen has always eluded us in the dry season, so we were hoping for some rain and for him to go out frolicking in it (in front of us of course).  So with high hopes of adding four to our total of 718, we excitedly set off.

The flight and collection of our rental buzz box (a Holden Barina) all went surprisingly well and we were on our way out of the airport and towards Julatten just after 8.30. First stop was near the turn off to Port Douglas where we has seen Little Curlew before. Not so this time, but a lone Barn Swallow certainly made up for it. Some shopping at Mossman saw us stock up on self catering foods for the first few days. We arrived at 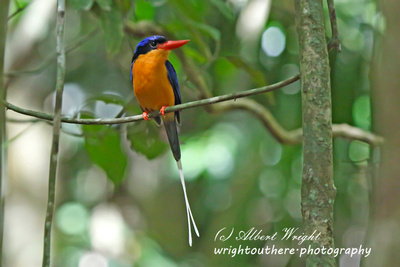 Kingfisher park in the early afternoon, but after a 4am start and  hour time difference, it had already been a long day. The prospect of a new bird though was far too eluding in order to be able to relax, so we were soon scouring the grounds of Kingfisher park for the much desired Paradise Kingfisher. An hour or so later, we were becoming a little despondent. This was supposed to be a cert after all! Finally a flash in front of us, and there it was. What a magnificent bird and totally worth the trip up, even if this was as good as it got. Over the next couple of days we were treated to better and better views of this delightful bird and Alby managed some brilliant photos. The Kingfisher Park stay was wonderful. We stayed this time in one of the rooms which was somewhat more luxurious than our previous stays in the campground. The birding was great, we had really close and lingering looks at Red-necked Crake, a bird we have only seen at a distance once before. The Papuan Frogmouth was sitting on a nest which was special and all the other spectacular northern birds behaved for us very well. The mention of a Bush-hen in the property next door got us all excited and saw us rising before dawn to try and find him skulking around. We did not manage to find one, however, despite our best efforts. Of great enjoyment was the relaxing on the verandah in the afternoon after a morning of birding quietly watching the numerous Emerald Doves, Pale Yellow Robins and Metallic Starlings which confidently went about their business in front of us.

After three delightful days of relatively cool weather up in the hills, it was time to head further north to Cooktown. Cooktown is an easy three hour drive through very dry cattle country. The roads were lovely and quiet, unlike in the dry season where there are thousands of people 'doing the Cape'. Just before we got to Cooktown, there is a swamp area where Spotted-whistling Duck had been reported a few weeks earlier. We weren't too confident, as the latest word was that they had moved on and were no longer present. At the bird hide, we met a local couple who 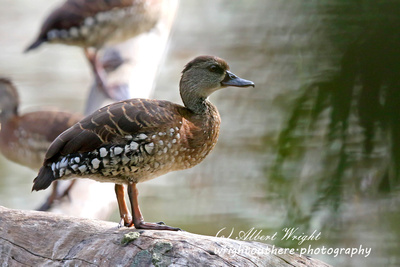 had binoculars and a telescope, so I immediately asked if they has seen any of our target ducks. They excitedly replied, that yes, they had seen them only an hour or so earlier. So with renewed vigor, we scoured every duck present. Nothing. Finally after a couple of hours sweltering in the heat and sun, we caught a long distant look of the elusive duck through our telescope. At last! It was not however a very good look and soon after, the lone duck headed back out of sight. Feeling sort of pleased, but also mildly cheated, we headed into Cooktown to check into our cottage. It turned out that in the five days we spent at Cooktown, we went looking for the ducks around 6-7 times and had two really good sightings. Phew! Great to finally catch up with these spotty ducks.

In order to get to the Black-winged Monarch location, McIver River, we had to hire a 4wd as our buzz box had very specific instructions about not going north of Cooktown. Therefore we found ourselves in the somewhat ridiculous situation of having two hire cars on the one day. We were fortunate that the place we were staying was also the hire car setup which made things very easy. So very early on the Saturday morning, we headed north in search of tick number three for the trip.

This proved to be one of those very rare birding moments where less than five minutes after arrival, I heard Alby cry "I've got one!". Brilliant,

such any easy tick (if you forget about the fact that we had flown to Cairns, driven 350km to Cooktown, swapped hire cars and driven a further 80km north on dirt road, yeah, really easy). We stayed all morning and continued to observe these attractive birds along with some other spectacular species.

Having satisfied our count for Cooktown, we were able to relax a little and spend some quality time on our verandah and in the lovely pool on the grounds observing the brilliantly coloured Wompoo Fruit-doves coming in to drink.

After five days in Cooktown, we headed back south to the Atherton Tablelands. This is a favorite area of ours and in particular the Lake Eacham area. We normally stay in the small caravan park, but this time chose Chambers Wildlife Lodge as it was recommended for birdos. It was certainly a great place with Victoria's Riflebird and Green Catbird being regular visitors to our balcony (with a few bananas as bribery!). The grounds were also superb, set in around 20 acres of rainforest with a perimeter walking track. The night life was a highlight too, we easily spotted Striped Possums, Sugar Gliders and Long-nosed Bandicoots.

The goal here was the so far elusive Bush-hen, our final target for the trip. Things were not looking good though as no rain had been forthcoming. We slacked off a little, knowing our chances were very slim and instead spent time at some of the fabulous birding sites that this area has to offer. The highlight was a spectacular male Golden Bowerbird who generously allowed us to get up close and personal.

One evening the heavens opened, dumping around 50ml of rain. Our hopes climbed and the next morning whilst still dark and damp, we went out hunting Bush-hen. Not surprisingly we had no luck, but had a few heart stopping moments when a sneaky Buff-banded Rail skulked in and out of the dense grasses in front of us. So, the Bush-hen wins again. Still, it doesn't hurt to have a reason to keep returning to this wonderful area.

We were fortunate to pick up one unexpected and high quality (ha ha) tick. For years we have been too pure to tick the Helmeted Guinea Fowl, believing that the locations we had seen them in could well render them at least semi domesticated. So we were rather pleased and surprised to see a mob (?) of around 20 or so of these comical chooks wandering around Lake Tinaroo among the pine plantation. Yay, finally we felt we could officially tick them. This turned out to be our forth and final tick for the trip.

On our final day, we headed down to Cairns and managed to pick up a lovely Rufous owl and some great waders to add to our trip list. We enjoyed a yummy celebratory lunch at a local Vietnamese restaurant and finally succumbed to the heat and humidity and turned the air conditioning on for a couple of hours. The apartment in Cairns was the only place we stayed which didn't have a balcony and we sorely missed it. Being cooped up inside with no breeze was rather stifling, hence the desire for some cooled air.

So the statistics for the trip are as follows:
4 new birds taking our Australia Life List to 722
176 birds for the trip
Around 1,600 images captured (now for the culling).

It was a great trip, both bird wise and relaxation wise. It was unlike any other trip in Australia that we have ever done, due to the change of accommodation. We really enjoyed staying in some lively cottages, but also missed the familiarity of our own tent and 4wd. The weather was surprisingly ok, not nearly as hot and steamy as we had expected. We felt it was in fact a particularly good time of year to visit the area with so few other tourists around, giving it a more realistic local feel.

So now we are back home and Alby has some serious work to do on his photos.

I guess now is a good time to wish everyone all the very best for the festive season and a happy and healthy 2015. Look forward to catching up with many of you soon.