Having survived the trials and tribulations of building our new house (which we excitedly moved into on December 6), the silly season, a bout of gastro, a funeral and the extreme heat, we felt a trip away was needed.

Whilst sitting in our shed, waiting impatiently for our house to be completed back on our 10th wedding anniversary on November 1, in our frustration we boldly decided to book a couple of trips. The first, which we are currently enjoying, finds us luxuriating on Norfolk Island. The second, in quite a different vein, will see us at this time next year in Sri Lanka (no points for guessing who chose which trip!).

So here we are on Norfolk Island, a place we would not have chosen to visit except for the 5 birds we expected we would be able to fairly easily add to our Australian life list. As a side issue it is a lovely, relaxing place to be. We decided to stay for two weeks to give us plenty of time to locate the required birds as well as having a good look around and quality relaxation time. There are two flights weekly from Sydney to Norfolk, so we first had to get to Sydney. To avoid the stresses of minimal time between arriving at Sydney's domestic terminal and having to change to the international one, we opted to spend a night at the Ibis budget near the airport. This proved a good idea, alleviating any potential hassles. We arrived on Norfolk around midday and were greeted by our hire car and someone to drive us to our accommodation. There is only one roundabout and no traffic lights, so navigation proved rather easy. Our units (we are here with P&J) are lovely. The are only the two on the block, they are spotlessly clean, boast magnificent ocean views and are in a convenient location. We could not have wanted for more. 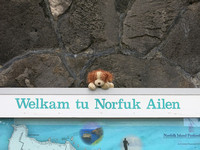 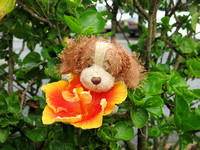 Taking the time to smell the flowers Our first afternoon found us in the supermarket scouring for vegan products with mixed success. Prices are steep, as expected. After the obligatory shopping was done, we headed to Palm Glen, part of the Norfolk national park. Almost immediately we were able to tick off Slender-billed White-eye (713), and heard a Gerygone calling. We tracked that down, an endemic Norfolk bird, for tick number 714. Being a little tired after a 4.30 am start, we called it a day and headed back 'home'. The ocean views from our verandah with White Terns, Red-tailed Tropicbirds, Sooty Terns and Black Noddies soaring overhead, proved an excellent setting for happy hour.

Our morning exercise proved very different than usual. There are hills everywhere! The humidity and the terrain saw us panting through our usual hour long pre breakfast walk (we did soon get used to it thankfully). More birding the second day saw us pick up California Quail (715). These are exceptionally cute individuals with a headdress to put anyone from the Charleston dance era to shame. They turned out to be quite common, but we were rather excited on our first sighting. We also managed to track down Pacific Robin (716) and the critically endangered Norfolk Parikeet (717). So after only 24 hours, with 13 days spare, we had ticked all the expected species!! Now that the pressure was off, we were ably to fully explore and enjoy the national park, the botanic gardens, some brilliant cliff top lookouts and even a small amount of local history.

The seabird watching was brilliant, with a couple of favorites making an appearance, the White-winged Petrel and Grey Ternlet.  As with most islands we have experienced, there are few land birds, both numbers and species. Within a day or so, you have pretty much seen all you are going to and can readily identify any bird without binos, as there are so few to choose between. We did manage one unexpected tick, the Morepoke (718). One evening (yes, we had to stay up after dark!), we went to an area other bird trip reports had recommended for this species. We were not overly confident as we do not do owls well and all the reports had said they had heard, but were unable to find the bird. Just on dark, we heard at least three individuals calling from different directions. A good start. Soon one came very close and armed with the trusty spotlight, we were, much to our great surprise, able to track it down. A memorable birding moment.

Panorama of 3 images stitched together

Enough about birding for most I expect, so on to some stuff about Norfolk. The locals are very welcoming; the spirits are duty free and therefore about $13/litre; the fuel is very expensive $2.64/litre; cows rule; Norfolk pines are prolific and very beautiful; most people visit here for the history; the weather is very mild; the saying about tourists being newly wed or nearly dead seems very apt; it rains daily.....multiple times; Kingfishers are called Nuffka's (whoops, back to birds!); the school hold its swimming sports day in the sea; there is no pier, so getting goods ashore is a complicated matter involving cranes, small boats, tug boats, forklifts and lots of people; the locally grown fruit and vegetables are great; most goods come from NZ. These are just some of my musings and observations of the island. As for the independence from Australia and tax free status, whilst still wanting all the handouts.....well that is another story.

Longboat with Phillip Island in the Background

Next stop, home for 24 hours or so, then to Clarkesdale for the Birdlife Camp, home again for a couple of months before heading north for winter.