July 26, 2014  •  2 Comments
It has been two months and thousands of kilometers since I last did a newsletter. Seems I have been a little tardy.  So here it is!
We are currently at Birdsville, enjoying some lovely mild weather before embarking on traveling south into cooler climes. 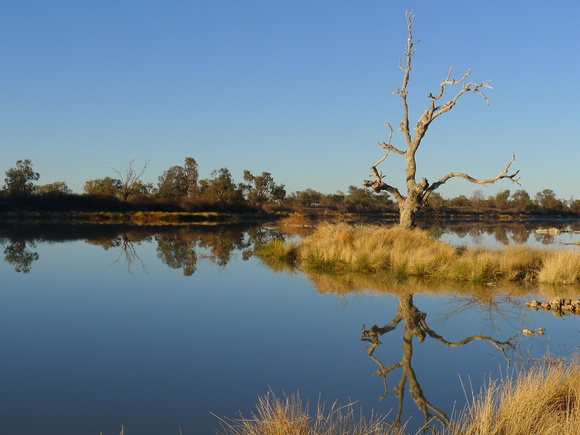 Since the Gold Coast and Binna Burra, we did a quick trip to Inskip Point for the sole purpose of trying to photograph the Black-breasted Button-quail. I particularly dislike Inskip, although the beach is magnificent, the thousands of people camped there are most definitely not! So I, more so than Alby was very keen to quickly get the photo and get out of there! Unfortunately, as with most well laid plans with birding, this was not to be the case. On the first afternoon, we found a single bird, but alas, it did it's disappearing trick before the camera could be activated. Further searching over the next couple of days again saw good sightings, but no photographic opportunities. Alby was extremely dedicated to the cause, knowing I was pretty desperate to head back inland as quickly as possible. It became an obsession for him and he continued the hunt through driving rain. Sadly, for  all his efforts, the birds continued to evade him. Disappointed and close to exhaustion, we hung up the camera.
Having had enough of the coast and the associated number of people, we headed inland. Auburn River NP is one we have not been to before and it was just the tonic after the crowded areas we had been in. The campground was lovely and peaceful as well as having a couple of nice walks. We spent a relaxing few days here, being serenaded by the friendly campground birds.
We then continued further west to some of our favorite places including Idalia, Welford and Lochern National Parks. These are all fairly rugged, dry places, but provide good specialist birding, nice walks and some lovely drives showing off the area. One of the particularly special things for us were the Halls Babblers we had as campground birds at a couple of these stops. We managed to drive nearly all the way from the coast on dirt back roads, exploring the vast area of stations, gas fields and the occasional nature reserve. Incredibly interesting to experience the slower pace of traveling off main roads.
Needing oil and a filter for the car, we headed to Longreach where in half a day we were able to shop, do washing and shower without having to stay at the horribly crowded caravan park. The CWA provides an excellent travelers stop including shower, couch and tea and coffee making facilities, all for a gold coin donation. Wow! We spent the night at an the unexpectedly beautiful Lily lagoon just north of town.
One of our main targets this year was the sub species of Striated Grasswren only found in and around the Opalton area. We were chasing this, as it is expected to soon be elevated to a full species and we wanted to cover our bases for an armchair tick when this happens. Opalton is an interesting place with a resident population of probably only ten or so. It is, as it's name suggests, an opal fossicking area, with hopefuls coming year after year to try their luck. 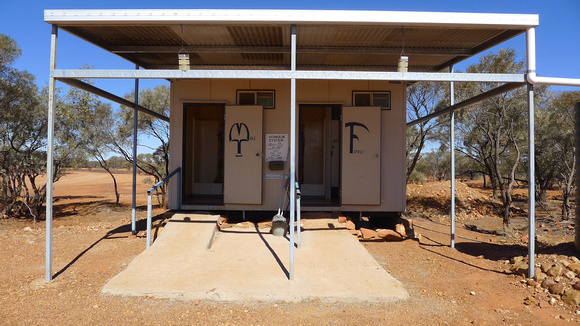 The camping area is pleasant and for $2.50 each per night we were treated to shower, flush loos (byo paper) and rubbish bins. We had been assured that the Grasswren was fairly simple to find. That in itself should have made us wary, but we headed out on he first morning ever optimistic. Four days and numerous Spinifex injuries later, we admitted defeat. We found absolutely no evidence of the Grasswrens the whole time. We did have lovely looks at Rufous-crowned Emu-wren, a pleasing second prize. Having dipped at Opalton, we stopped off at Lark quarry, another potential spot for these crazy birds. This time we were in luck and within half an hour heard and then briefly saw a small party of what will hopefully, one day soon become the Rusty Grasswren.
Bladensberg NP is a lovely spot, but rather spoilt by the number of people using it as a free overnight camp. We were treated to a pair of Budgies nesting above our camp and were fascinated by how hard the male worked all day bringing food back to his mate.
Instead of going the easy way along the highway to Cloncurry, we again headed down the unsealed back roads through Middleton and through large scale farming and mining areas. The landscape was spectacular and we were forced to slow down and enjoy even further by the numerous gates (rather tedious after ten or so!).
We lashed out in Cloncurry and took a cabin for the night, the only one of the trip after our week of luxury at Binna Burra. The owners were especially generous and let us into it at eleven o'clock, so we had a full day of comfort. Unfortunately, disaster struck as Alby once too often dropped his laptop from the overcrowded car and was rewarded by the black screen of death. This was nearly a trip stopping event, as how was he now to store and process the precious bird photos? 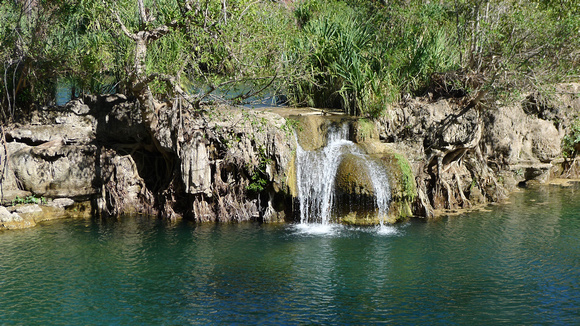 Courageously, he managed to persevere and our next stop took us to Boodjamulla NP, firstly Miyumba bush camp for two days, then Lawn Hill gorge campground for six. This is the first stop where you feel you are truly 'up north'. River crossings become common and are lined by beautiful levistonia palms. The birds become exotic, Buff-sided Robin, Barking owl, Purple-crowned Fairy-wren and numerous finches. So we had made it!  Miyumba was  beautiful and peaceful, but Lawn Hill gorge rather the opposite. Unfortunately the time we were there was school holidays and so packed full of families. Most of you are probably aware of our extremely low tolerance of screaming children. Not to worry, we still enjoyed the numerous walks and even braved a dip at the falls.
We continued heading north, whilst wondering how long our tolerance for crowded places would last and knowing it would only get busier the further north we went. Hells Gate roadhouse was a pleasant campground with a particularly helpful general fix it guy who assured us our increasingly noisy muffler would not fall off in the immediate future and even if it did, it wouldn't really matter. So rather that wait a week or more in Borroloola for a replacement, we headed into Seven Emu station. This proved to be a brilliant stop, the highlight of the trip. We had a totally private camp site, complete with extensive shelter and a loo with a view, overlooking the impressive Robinson River. The birding was easy and plentiful (just under 100 species for three days) with the highlight being excellent views and photographic opportunities of Pacific Baza. Feeling very relaxed, we headed to Borroloola, which is really only a stop off point for fishermen heading to King Ash bay. We spent the night there listening to some very loud locals, barking dogs and revving cars. Needless to say one night was more than adequate.
Luckily the next day was better as we finally caught up with P&J having last seeing them in the middle of May. We spent a couple of nights in a gravel pit outside Caranbirini nature reserve. This is a lovely reserve for both birding and scenery. There is reputedly a population of Carpantarian Grasswren here, although we could not locate it and neither has anyone else for over twenty years. By coincidence, we were in fact lucky enough to meet up with the people who had last seen it and recorded its call, Graeme and Pam Chapman. We spent two lovely, social days catching up with P&J and getting to know the knowledgeable and gregarious Chapmans. 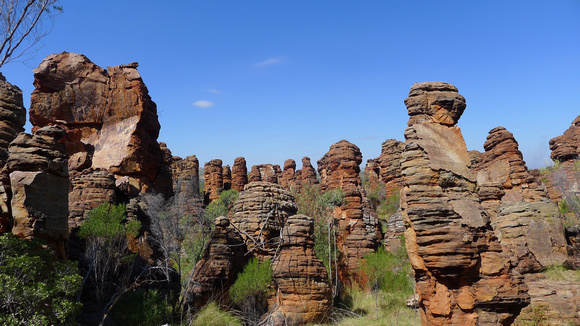 Limmen NP was next on the agenda. This area sports the amazing Southern Lost city sandstone formations which rival the Bungle Bungles, as well as the peaceful Butterfly springs and some other lovely camp areas. It is becoming a popular area, especially with fishermen, but we were still fortunate enough to find a few quiet spots.
After finishing the Savannah way and popping out at Mataranka, we were faced with the decision as to whether to head further north into the ever popular Kakadu and Darwin areas, or turn left and enjoy some desert time before going home. Three nights at Elsey NP made our decision for us. Firstly, it was incredibly busy, more reminiscent of a caravan park that a national park and secondly friends Jodene and Nick whom we met there said they would be in our area (Maldon) for a couple of days in mid August before heading to South America for three months. So the decision was made. We waved goodbye to P&J as they headed further west and north (being more tolerant than us) and spent a brilliant three days catching up with Jodene and Nick whom we only see once or twice a year as they are traveling full time. 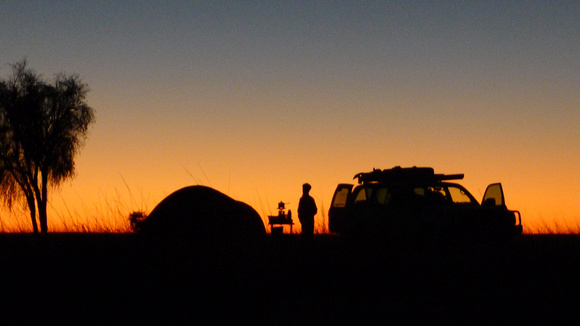 We then turned left to head back south. We meandered our way through the magnificent Barkly grasslands areas enjoying numerous Flock Bronzewing, Pratincole and the highlight, Yellow Chat. Two days at Mt Isa chasing the local Grasswrens left us feeling very depressed at the total destruction of their habitat by fire and mining.  More dirt tracks on our way to Birdsville gave us not only total seclusion, but also plentiful Gibberbirds and Inland Dotteral as well as a small flock of Orange Chats. We loved our time through this area and felt pleased at our decision to head this way. We are currently enjoying two days at Birdsville sitting at the side of the lagoon and lapping up what we expect may be the last mild days of the trip.
Next will be down the Cordillo Downs road in the vain hope of sighting a Gray Falcon, then on to Innaminka, through Sturt NP and then probably quickly home for some cold weather in the comfort of our still new home. Hope the Flame Robins are still around for a while!!
« Previous Post Next Post »