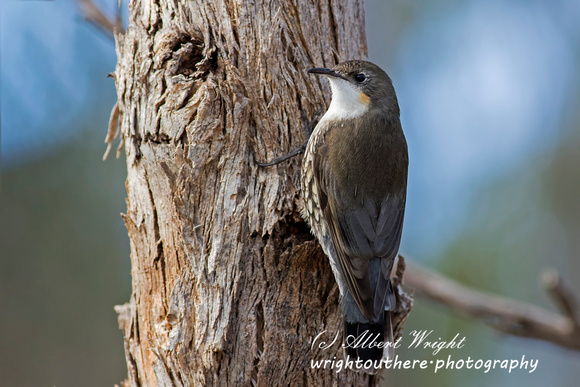 There are 7 species of Australasian treecreeper in the passerine bird family Climacteridae. They are medium-small, mostly brown birds with patterning on their underparts, and all are endemic to Australia-New Guinea.
As their name implies, treecreepers forage for insects and other small creatures living on and under the bark of trees, mostly eucalypts, though several species also hunt on the ground, through leaf-litter, and on fallen timber.
Australasian treecreepers nest in holes in trees. The species in the family hold breeding territories, although the extent to which they are defended and last varies. Some species, such as the Red-browed Treecreeper and the Brown Treecreeper are cooperative breeders, others, like the White-throated Treecreeper are not. The cooperative breeders form groups or a single breeding pair as well as up to three helpers, which are usually the young males of previous pairings. Helpers assist with the construction of the nest, feeding of the incubating female and feeding and defending the young.


From Wikipedia, the free encyclopedia http:/​/​en.​wikipedia.​org/​wiki/​Climacteridae