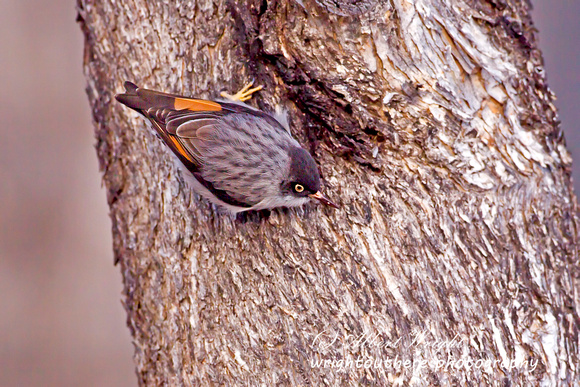 The sittellas are small woodland birds with thin pointed down-curved bills, which they use to extricate insects from bark. Nests are open cups in forked branches.
The sittellas are social and generally restless birds of scrub, forests and woodlands. In Australia they generally avoid only the dense rainforest, whereas in New Guinea this is the only habitat they inhabit, avoiding only lowland forest. They generally live at low densities, between 0.1 to 0.6 birds per hectare, and are sedentary. The sittellas are generally highly social, usually being found in groups of five or more individuals and only more rarely in pairs. Studies of varied sittellas in New South Wales suggest that they live in clans of eight to twelve individuals and defend mutual territories against other groups. Within the groups, mutual preening is common, and in the evening the groups roost communally as well. Birds traveling to the evening roosts do so at slightly different times, timing their arrival at 30–60 second intervals, presumably so as not to attract the attention of potential predators. Roost sites are usually high in trees on slightly inclined dead branches. All the birds in the group roost next to each other, touching, and facing the same direction. Amongst Australian birds varied sittellas are usually the first to arrive at roost sites in the evening and the last to leave in the morning, although they are not necessarily the first to sleep or last to wake. At the roost site the position occupied along the branch is generally not random; instead males generally adopt positions at the edges of the group whilst young birds tend to be found in the centre.
From Wikipedia, the free encyclopedia https://en.wikipedia.org/wiki/Sittella